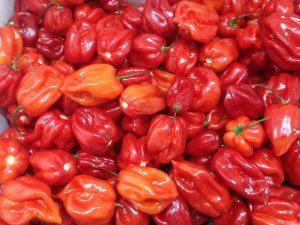 If you love hot chillies, then you probably already know about the wonders of the habanero. There is a special something about the citrusy flavour and fiery heat that is completely and utterly addictive.

I’ll never forget my first encounter with a raw habanero. Before that day, the hottest chilli I had eaten straight off the plant was a birdseye (approx. 100,000 SHU), and I really didn’t understand how extraordinary the difference would be. This innocent looking chilli was orange, smooth and inviting so I took a decent sized bite. At first, the flavour grabbed me – it was fruity and aromatic and totally delicious, but then the heat took over… Wow! Cue a pained expression on my face, a few choice words, and steam coming out of my ears! It was the hottest thing I had encountered! I know some of you reading this will be accustomed to the intensity of raw chillies, and I know there are lots of people who will readily chew through a Carolina Reaper, but I’m not the biggest fan of eating chillies raw; I much prefer to pair them with other delicious flavours and make sauce! I am however, glad I did take that bite, as it has led to many more tastings of raw pods and the development of a range of Habanero Hot Sauces for The Chilli Project (and the ideas still keep coming!) 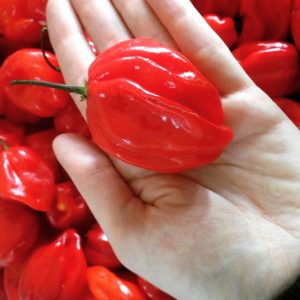 The habanero has been around for thousands of years, and these days is predominantly grown in Mexico (although it’s wonderful to see so many Australian growers around too, and you can now buy them at most major supermarkets). It held the title as the world’s hottest chilli until 1999 but has since been taken over by many other super-hot varieties. It has a Scoville Heat Unit rating (SHU) of around 300,000 (although like with all chillies, there are big variations in the heat of individual pods) and comes in a variety of colours; red, orange, chocolate, mustard and peach.

When considering that the Bhut Jolokia (ghost chilli) has a SHU rating of 1 million, the Trinidad Scorpion Butch T averages 1.4 million SHU and the Carolina Reaper has a rating of around 2.2 million SHU, you might be fooled into thinking the Habanero is mild, but let me assure you it still packs a huge punch (and it’s as hot as I’m willing to go when eating one raw!)

Here at The Chilli Project, the habanero is our favourite chilli and as a result, we have developed a few sauces where it is the true superstar! If you love habaneros like we do, then we recommend giving these a try, as they have wonderful flavour to them in addition to the heat.

Habanero Hot Sauce
This is our original (and staple) habanero sauce, and has a carrot flavour base. The sweetness from the carrot pairs wonderfully with the heat of the Habanero and makes a fantastic all round flavoursome sauce to accompany cheese, vegetables, chicken, red meat, and pork. It also makes a fiery salad dressing when mixed with your favourite vinegar! We were delighted to have spice master and chef Andrew Dove review this sauce for us, where he gave it a flavour rating of 8/10;

“As I cracked the Bottle the First thing that I noticed was the thickness of the sauce, then distinct aroma of the Habanero became apparent.
This sauce is as thick as a chutney, which in my eyes is a good thing, for you know you are getting quantity, not a watered-down sauce…. This sauce is a real pleasure to eat, evenly balanced heat, flavour and texture… This would be perfect on whole fresh steamed Snapper, just as well as it would on a burger, versatile, and easy to match with white meats, vegetarian foods such as tofu our stir fries. Hell I could use this almost anywhere.
The Chilli Project has come out of nowhere with sauces that have really blown me away, quality, and Quantity, not watered down thickened cheap versions.
…. For flavour, this achieves a score of 8 out of 10”
Thanks again Andrew!

Habanero & Orange Sweet Chilli Sauce
If you love the flavour of your regular supermarket sweet chilli sauce, but wish it was hotter, then this is a great sauce to try! Paired with Australian oranges (a natural flavour match for the citrusy bite in the habanero), garlic and ginger, this heat from the habanero shines through and you’ll find yourself putting it on everything! It’s great with meatballs, chicken wings and on ham sandwiches, but also makes a fiery topping for a cream cheese dip, with spring rolls or on fried tofu!

Tropical Blaze Hot Sauce
This sauce was developed to celebrate the sweetness of Australian tropical fruits. With a mango, pineapple and orange base, this sauce goes wonderfully with prawns, chicken, pork and tofu. If you love the flavour, but find the heat a bit intense, it is fantastic mixed with mayonnaise as a dipping sauce for prawns crumbed chicken, or on a sandwich.

The habanero chilli also features in our Smokin’ Hot BBQ Sauce but is the mildest chilli in the mix. It is purely there for its wonderful flavour but the star of this sauce is the super-hots (including Carolina Reaper, 7-Pot varietals and Trinidad Scorpion Butch T). If you’re a chilli head who also loves flavour, then this is a great one to try!

We have a few more ideas in the making for more fresh & flavoursome habanero sauces, but if you have any suggestions, we’d love to hear them!